Colin is one of many champions being highlighted by the GEM Report in the run up to the launch of its 2020 publication on inclusion and education: All means all, due out 23 June. In their own way, and in multiple countries around the world, these champions are fighting for learner diversity to be celebrated, rather than ignored.

In 2008, Johannesburg experienced a heavy wave of discrimination and xenophobic attacks against the immigrant community. At that time, Colin Northmore, the then principal of Sacred Heart College, a school known to many for its fight against apartheid, was approached by the Marist Brothers and a Methodist bishop asking him to do something to alleviate the plight of immigrant children unable to access schooling. Sacred Heart College agreed to assist and the Sacred Heart College Board of Governors made a decision to extend its educational expertise to its neighbouring immigrant communities in the form of an afternoon bridging programme. This is when the Three2Six project was established. Despite being a constitutional right, the right to education in South Africa is not realized for many due to various barriers such as documentation. In addition, English is a pre-requisite for children to be able to enrol in school. Immigrant students often come from Francophone and Lusophone countries.

Three2Six offers 3 hours of daily education– from 3pm to 6pm – to immigrant children of primary-school age who cannot access state schooling helping them to get up to speed in curriculum content by teaching them English, Mathematics and Life Skills to join the public education system, and building up their resilience to prepare them for this transition. Students also receive meals, uniforms, textbooks, stationery and transportation services when needed. The integration process takes 18 months on average. Although it began at the Sacred Heart school, Three2Six has now expanded to two other campuses in Johannesburg, Observatory Girls’ Primary School and Holy Family College, and serves 225 students compared to 62 in 2008. Since its inception, over 600 children have been able to register at state schools with support from the project. 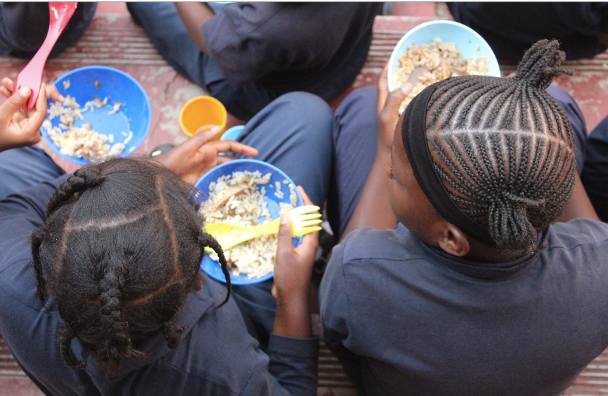 The Three2Six project also provides employment for teachers within immigrant communities who are not able to find work in the South African system. Teachers receive training alongside their peers from the host schools and receive support to validate their teaching credentials from their countries of origin and acquire South African teaching qualifications, with many of them managing to complete master’s degrees and other specializations. The project also serves an advocacy function. In collaboration with NGOs and human rights groups, the management team of the project advocates with the government to include immigrant children into the national education system.

“It is only when a country can assure the rights of the furthest marginalized, that we can say that all of our rights are accomplished”.

It is not a surprise to hear that the immigrant community like the programme: the waiting list for the schools is three times the capacity of the program. Mark Potterton, the current director of the project, considers its success comes from its main value: reciprocity. Not only do teachers from the host schools and the program interact during teacher training sessions, but students also interact with each other, with South African students often volunteering as reading partners, leading physical education classes for their afternoon schoolmates and joining the yearly December holiday programme.

“Teaching educators and pupils about the rights of refugees and other marginalised groups and their experiences is critical to fighting discrimination and xenophobia at a large scale. Teaching tolerance, empathy and the importance of inclusion at a young age will have a lasting impact on a society as a whole.”

Join our first ever virtual global launch on 23 June to hear from inclusion champions, ministers, teachers and celebrities from different corners of the world.