What are the financial implications of the coronavirus for education?

How long is a piece of string? You might be asking, looking at the question this blog is asking. And to some extent, you’d be right. In these early days of the outbreak, it is as yet unknown how long it will be among us, and for how long measures, such as school closures will be required.  We don’t know how much budgets are going to be diverted or how long austerity will be in place to recover the costs of the temporary emergency measures. But instead of fixating on what we do not know, however, let’s list what we do.

One report, which looked at labour market data in the United States, the United Kingdom and the eurozone surmised that, in the event of school closures, up to 20% of the workforce may need to take off work to care for dependent children. If this were to be the case for four weeks, the GDP of these countries could fall by 1.5%.

A separate study looked just at the UK, showing that school closures lasting four weeks could cut 3% from the country’s GDP, costing the economy billions of pounds.  Most studies, however, tend to look at the case of the United States. One, conducted in 2009, which estimated the effect of potential measures under the federal government’s Community Strategy for Pandemic Influenza Mitigation, found that the cost per student per week of school closures that leaves parents unable to work ranges from US$35 to US$157. In total, closing schools for four weeks would cost between 10 and 47 billion US dollars, equivalent to 0.1-0.3 percent of US GDP.

The three researchers dusted their assumptions of ten years ago to produce an updated estimate in the context of the current crisis, which confirmed these fairly devastating sums: $51 billion a month, equivalent to 0.24% of the US economy, would be the price of closing all schools. 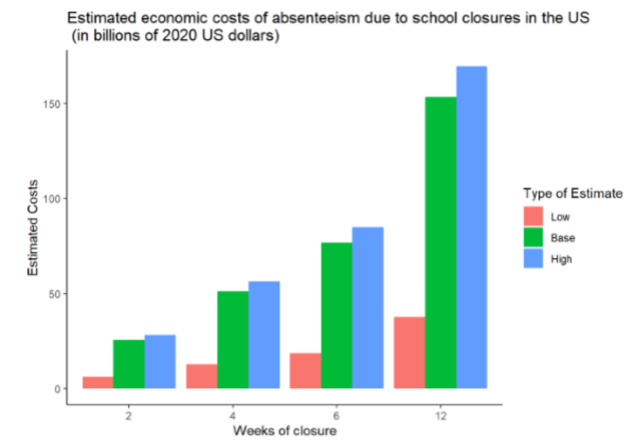 The cost of these closures will not necessarily be the same in all countries. Such costs will depend also on the structure of labour markets, the nature of jobs, and the extent to which household members can share time for childcare. School closures hit the poorest first. In Los Angeles, nearly 80% of public school students qualify for some form of school meal whose absence will be strongly felt. In the United Kingdom, less than one in ten of the bottom half of earners say they can work from home, while all of the highest earners can.

And school closures are only one of several factors that are currently affecting economies, including the closures of firms themselves, the drastic slowing down of some economic activities and the interruption of supply chains. The financial crisis we are facing now is, according to early estimates, likely to be worse than the great financial crisis of 2008-9. Nevertheless, for potential long-term repercussions on education, looking back to those years still lends some insight.

Globally, as the 2020 GEM Report will show, the relative emphasis on education spending after the 2008-9 financial crisis was not affected. On average, what countries allocate to education as share of their budgets or their GDP has not changed. But the financial crisis affected the absolute levels of GDP leaving less money to spend. 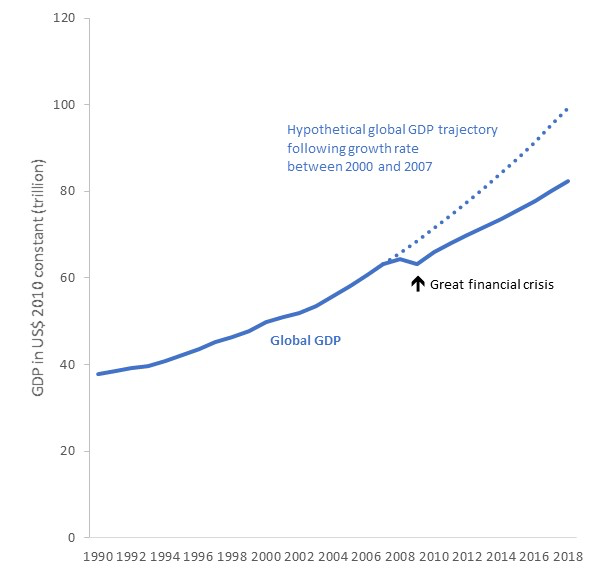 The effects of a crisis on education finance can be particularly strong in the short- to medium-term. For instance, teachers’ salaries were either frozen or cut between 2009 and 2011 in 12 out of 25 OECD countries with data.

The effect for some of the poorest countries, where more than 20% of their public education expenditure is accounted for by aid, can be significant. For instance, the 2012 GMR had shown that spending on education had contracted by 7% in Chad and by 10% in Niger between 2009 and 2010.

Finally, depending on how long school closures last, governments need to be aware of the risks that prolonged distance from school may prompt early school leaving. They need to have plans for funding support so that children out of school now aren’t out of school for ever. Sierra Leone, for instance, waived standard examination fees and subsidized secondary school matriculation fees over the two years following the Ebola crisis. Governments will need to be creative in the recovery phase after the end of the coronavirus pandemic.

This entry was posted in Economic growth, Finance, Out-of-school children, Uncategorized and tagged coronavirus, covid19, Finance, financing, out of school. Bookmark the permalink.

2 Responses to What are the financial implications of the coronavirus for education?