Private sector participation in education: where it occurs, and why

The privatization of basic education is a global phenomenon, growing in all corners of the world. As a pre-cursor to a larger discussion on this issue to be featured in the 2021 GEM Report on non-state actors in education, this blog looks at its growth in different regions, why it emerged, and how it has developed.

The privatization of education has evolved differently and intensified further in some regions than in others. For instance, as the figure below shows, in Latin America the percentage of countries with more than 20% of private enrolments in primary education expanded the fastest between 1975 and 2015, whereas in Europe and in Central Asia the growth concentrated among countries with 10%-20% of private enrolment.

The pace and historical evolution of such developments also vary across regions. In the Middle East and North Africa, the expansion of private enrolment has taken place gradually since 1995, while in South Asia private enrolment expanded rapidly during the 2000s.

Percentage of countries by their share of private enrolment in primary education, 1975-2015 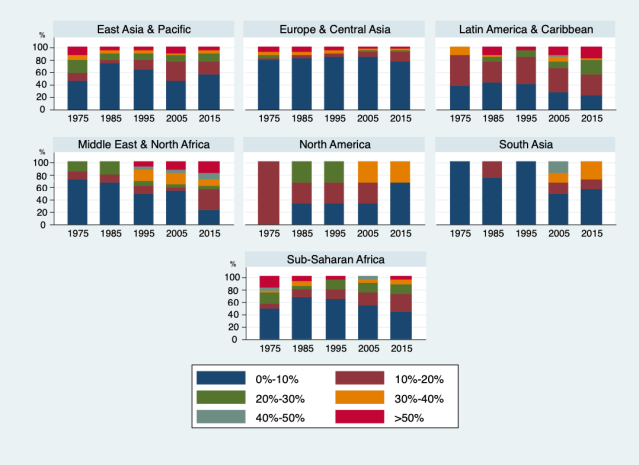 Why and how does education privatization advance?

Not only are regions becoming more diverse in how much space private provision is gaining, but the reasons and causes driving its rise are also multiple and have evolved over time. Based on a systematic literature review we have conducted in the past, it is possible to discern at least six different paths that lead towards the privatization of education (see a short description in the table below). These paths differ not only in the policy outputs into which privatization crystallizes (e.g., vouchers, charter schools, partial subsidies for private schools, low-fee private schools, etc.) but also in the drivers that explain these transformations – that is, in the causes, rationales and contextual factors triggering and mediating in such processes of policy change. 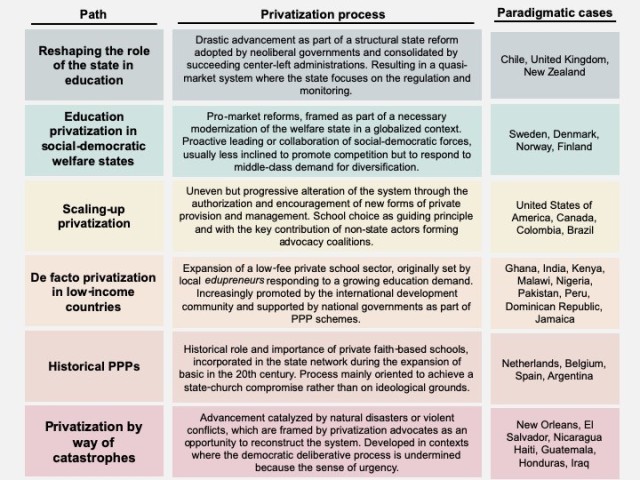 Privatization can happen by design or de facto. When it is by design public authorities proactively promote explicitly pro-private sector policy measures – often motivated by ideological reasons. In the late 1970s and beginning of the 1980s, for instance, strongly inspired by public choice theory and the popular economic ideas of the Chicago School, the first wave of neoliberal governments privatized public assets to generate state revenue and encourage market competition. This is why education privatization measures adopted in such a context frequently combine free choice and competitive funding formulas aimed at empowering families and make educational providers more responsive to clients’ demands.

Nonetheless, privatization by design can also happen without being driven by a neoliberal logic. In countries such as the Netherlands, Argentina or Belgium, for example, the state has contracted out the provision of education to private – usually religious – schools, due to their historical role in the educational system and the political and institutional significance of faith-based organizations.

De facto privatization, in contrast, advances for reasons that are apparently unrelated to public policy intentions. De facto privatization often unfolds in contexts where the state does not react to citizens’ demands for new educational services and these citizens turn to the market to satisfy their needs. Lack of state administrative capacity for education planning or insufficient resources to invest in public education are some of the reasons why the phenomenon of Low Fee Private Schools has boomed in many low-income countries.

Beyond the neoliberal creed: privatization as a global policy

In the 1990s, after the fall of the Berlin Wall, the privatization agenda penetrated into different regions of the world. During this period, international financial institutions started to give aid conditionally to transitioning economies and low- and middle-income countries, which required substantive budget cuts in public services and led to pro-private sector reforms. These structural adjustments particularly affected Latin America and Sub-Saharan Africa regions, where many countries experienced economic crises in this period and public debt had reached high levels.

In Europe, the Maastricht Treaty, signed in 1992, also created a fertile environment for privatization due to the fiscal austerity it imposed on European Union members. This restriction on public expenditure shifted the emphasis on provision to private entities. In continental Europe, privatization was more pragmatic and moderate form than in Anglo-Saxon countries, and did not penetrate into public services such as education so substantially. This is because the strong welfare state tradition and a culture of social dialogue between government, unions and civil society that prevail in most European countries held back anything more.

Broadly speaking, left-wing governments have been historically reluctant to adopt privatization measures. However, the so-called Third Way in the 1990s, saw it acceptable for left-wing parties to also say that fully public and homogenous services might not be the way forward. This led to the neoliberal discourse about the ‘inherent superiority of the private sector’ being replaced with a belief that market reforms could help modernize public education and promote greater innovation and diversification. The labor parties in the UK and Sweden in the 1990s were swept up by this change, for instance, which translated into a rapid increase of private provision in education.

In contrast to political factors, economic drivers are even more influential. A more liberalized global economy motivates governments to outsource all types of public services, particularly during periods of economic recession.

Overall, the way that non-state actors engage in education differs. It is significantly determined by context, and driven by multiple rationales. Despite this, research has tended to focus on a relatively small number of country settings – with many countries and even entire regions remaining largely overlooked. This is all the more relevant considering that in some of these under-researched areas, such as Qatar, Mauritania or Morocco, Hungary, Georgia and Slovakia, private enrolment has soared over the last years.

Gaining a richer understanding of these trends is particularly important given their social implications. Although available evidence on the impact of privatization on learning outcomes yields mixed results, there is a relative consensus that it tends to affect equity negatively. Privatization has been reported repeatedly to exacerbate school segregation, social stratification among schools and marginalization of the most socioeconomically disadvantaged students. Private schooling presents thus a major challenge for policymakers and education planners across the globe. In light of this, policy responses need to be informed by a context-sensitive understanding of the phenomenon. While regulation and oversight could be possible policy solutions to advance towards greater education equity, such efforts might not work in any circumstance and need to be tailored to the context if they are to be effective and sustainable over time. The 2021 GEM Report on non-state actors in education will be an important contribution by shedding more light on this pressing issue.