Feeding into the theme on inequality of this year’s G7 Presidency, we have carried out a breakdown of G7 donors’ aid to education to show that 55% goes to achieving gender equality. France, which holds the G7 presidency, allocates the second highest share (76%) after Canada (92%).

This analysis was a follow on from a broader analysis of donor aid to gender equality in education from our new Gender GEM Report released today at the G7 France – UNESCO International Conference. The Report, as we showed on this morning’s blog, gives five key steps to stamping out gender inequality in education. 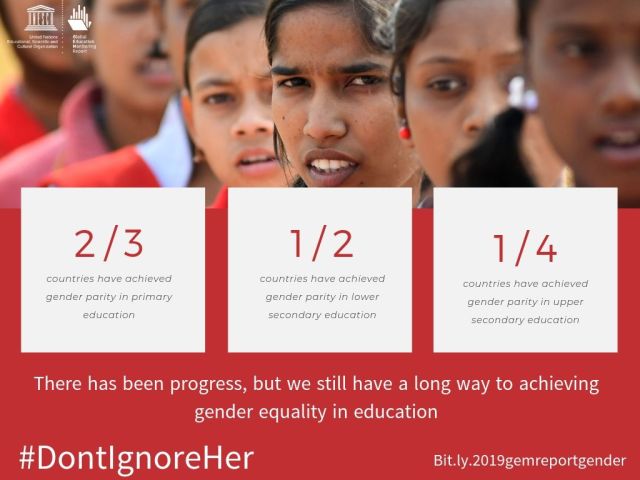 Key for the G7 ministers of education and development lining up in Paris today is our emphasis on the need for donors to have up-to-date policy frameworks on gender equality in education and to follow champion countries such as Canada. But this is just a starting point. Programming needs to sharpen its focus on the key question of how interesting and innovative projects can graduate into national policies. Adherence to principles of aid effectiveness and donor coordination requires agencies to build in sustainability, capacity development and evaluation so that good practice is identified and rolled out.

As part of the preparation for today’s Conference, the GEM Report team and UNESCO sent a questionnaire to the aid agencies of the G7 countries, selected international organizations and NGOs, asking them to put forward their flagship projects for tackling 12 priorities in girls’ education. We wanted to look at the different types of responses to gender inequality key actors are taking. The full summary is in our new Report. The key policies we identified are here:

As a further response to this year’s G7 focus, the GEM Report team carried out an analysis to feed into its call to strengthen gender-responsive education sector planning. We looked at the 20 countries with the largest gender gaps in education to see what policies on gender equality they prioritized in their plans.

Our analysis found that cash and in-kind transfers are the most popular policy, featuring in three out of four plans. Curriculum and textbook reform, girls’ participation in science, technology, engineering and mathematics programmes, and safe access to schools, were the least common, appearing in only a fifth of countries’ plans. The plans of Angola, the Central African Republic, Djibouti and Mauritania made scant references to gender inequalities in education, but those of Niger, Guinea and Somalia have strong roadmaps for change.

You can access all our key messages from today’s Gender GEM Report and join in the conversation with #DontIgnoreHer.