A month ago, an article in Devex described the risk of fragmentation posed by the explosion of new international education financing mechanisms– especially as the pool of funding remains constant. Yet, the risk of fragmentation does not seem to apply just to funding mechanisms. A lack of cooperation is becoming increasingly apparent also in the production of international education data. 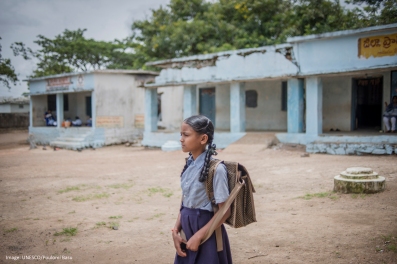 In February, the UNESCO Institute for Statistics (UIS), the custodian agency for most of the indicators on international education targets, announced that 263 million children and youth were out of school in 2016. With the international community expecting the release of the new data for 2017 a week from now, according to the improved schedule that UIS recently agreed with countries, UNICEF has today released a ‘media report’, which claims there are 303 million children and youth out of school, or 40 million more than previously estimated.

Has there been a sudden emergency or crisis, some might ask? No. This new calculation simply involves the inclusion of children age 5, which is not how the international community has agreed to estimate the global out-of-school population. The crisis is just a UNICEF marketing gimmick.

It is questionable how useful it is for another UN agency to re-jig last year’s calculations a week before the release of new data for 2017, thereby confusing audiences on what numbers to trust. So what is this about? UN agencies have areas of work they each focus on to maintain clarity and avoid duplication. UNHCR is the ‘Refugee Agency’, for instance. UNICEF is the Children’s Emergency Fund. UNICEF does not have a mandate to release data on out-of-school populations. But it has shown an unexpected recent interest in ‘youth’, which this media report is aiming to draw attention to.

Fragmentation of this nature is not confined just to out-of-school data. Currently, the World Bank is putting resources in the Human Capital Project that calls on countries to ‘understand the link between investing in people and economic growth, and to accelerate financing for human capital investments’. Supporting the project is a new Human Capital Index (HCI), which includes survival, health but also two education indicators: expected years of school and harmonized learning outcomes.

But the World Bank has not requested the data for these two indicators from UIS. Rather, it claims that the first indicator is a slightly improved version of one already produced by the UIS. And, more controversially, it duplicates the data for the second, which is an SDG 4 global indicator that UIS has an international mandate to measure. UIS has in the last three years been trying to achieve consensus on a global measure of learning outcomes, which requires careful technical analysis and political negotiation. But the new HCI brushes all this aside.

Taking this broader than just the UIS, one might ask what the new HCI Index will add to the influential Human Development Index that UNDP has been producing since 1990?

The global education goal monitoring framework already has 43 indicators. No one can honestly feel we need more at this point. If methodological improvements are needed, there are mechanisms to do this – both at the education sector level and at the global level. A better approach would be to support those mechanisms and those tasked with refining the indicators we have and sourcing the data to measure them.

Such work can be called a ‘global public good’, which transcends borders and provides benefits for all. We released a paper earlier this year on such goods in education, looking at three types in particular – data, research and networks. As we said at the time of the paper’s release: It is important to resist piecemeal, short-term, project-based approaches that would put the delivery of global public goods at risk.

New contributions to the debate on education data are of course always welcome. But global data are not just for show. They are vital for informing global and country leaders about the state of education progress. Different calculations and assumptions, while useful for short term press attention, do not help. They add to the proliferation of conflicting pieces of information and send mixed messages to countries.

5 Responses to Is global education data heading toward fragmentation?