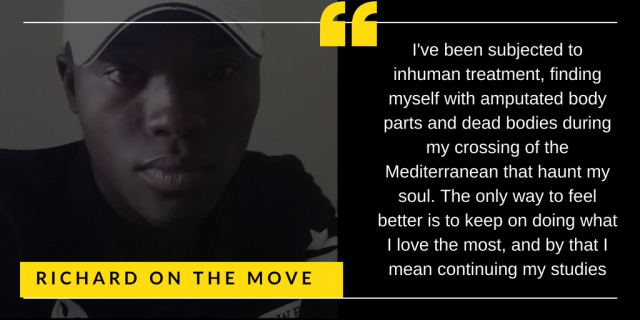 It’s back to school month in many countries around the world. Pencils, bags and reading lists are being compiled by some children, but not by all.

Meet Richard, an asylum seeker from Chad. Aged 21 years, he left Chad after finishing one year of university studies and travelled land and seas to get to France. He is one of the lucky ones in some respects, being one of 41 among the 171 on his boat to make it alive to the other side. Finally on safe ground, he now wants to continue his studies. The problem is that, while he can enroll in a university, until his refugee status comes through, he will only be a guest student; no residence status means no diploma.

Richard is the first of many people to front a campaign we will be running over the course of the next year, #EducationOnTheMove. The campaign will be following migrants and refugees in real time, as they try to access education around the world.

It aims to demonstrate the determination, perseverance and strength of people on the move, as well as the courage, hospitality and selflessness of the teachers and communities who support them in their pursuit for learning.

Richard is already joined in the campaign by:

On November 20th the 2019 GEM Report, Education, migration and displacement: Building bridges, not walls, will be released. The stories told through the #EducationOnTheMove campaign are self-standing in their importance. But we also hope they will demonstrate the importance of the findings and recommendations in the Report. We will be developing the campaign on the Report’s release to show how the individual education struggles faced by those sharing their stories are representative of challenges faced by so many the world over.  To take part, please retweet and share, and look out for the Report this November.