What matters for education reform? Lessons from the Partnership Schools for Liberia experiment and beyond

Engaging the private sector to overcome the learning crisis is all the rage in global education. This is giving rise to heated debates, as evident from responses to a paper just published on Liberia’s high-profile ‘Partnership Schools for Liberia’ (PSL) experiment. 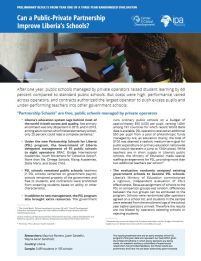 The authors of the Liberia report conclude: ‘After one year, public schools managed by private operators raised student learning by 60 percent compared to standard public schools. But costs were high, performance varied across operators, and contracts authorized the largest operator to push excess pupils and under-performing teachers into other government schools.’

While the learning gains are important, this does not sound an overwhelming success, particularly given the low base of learning, and that in some cases the programme resulted in a shuffling of students between schools. Overall, there is no evidence that the programme increased enrolment in a context where only around 38% of children of the official school age are in school. As most of the children not in school are from the most disadvantaged backgrounds, these children did not have a chance to benefit from the programmes. Moreover, the learning gains of 0.18 standard deviations are also relatively modest according to J-PAL’s assessment, which suggests that a 0.1 standard deviation improvement is typically considered a small effect.

It is important nonetheless to unpack the reasons for the learning gains to the extent possible to learn lessons for Liberia and other related contexts. At best, the randomized control trial of the kind that has been undertaken can give us important information on whether an experiment has worked or not. In the case of the PSL experiment, so many other things happened (as is the case in the real world) that we cannot actually say if the experiment as originally designed worked. As such, the experiment is unable to give guidance on whether it was the contracts that had the effect on learning or something else.

And to the extent that contracting was an important reason, the experiment cannot explain why and how this worked, notably what effect it had on practices in the classroom. The reality is that each of the contractors probably had different approaches to their work with teachers in the classroom, with varied pathways to learning – some potentially more effective, sustainable, and educationally-relevant than others.

Based on the findings, I propose some key policy areas that deserve attention:

Money matters: A recognized flaw in the design of the PSL experiment was that there was only enough money to pay the private contractors an additional $50 per child, while the government schools in the comparison group did not receive these additional funds. As such, the comparison between PSL and other government schools was skewed in the design by different resource availability. On top of this, most of the private contractors were able to leverage more money for their schools, some raising substantial sums. This could suggest that an important benefit of engaging private contractors in education is that they can help to fill the financing gap. It also indicates that, contrary so some of the debates in education, money does matter. In this case, private contractors have improved learning with (significantly) more resources. Whether this is ultimately cost-effective is open to on-going debate.

Political will matters: As evidence from the Liberia experiment highlights, the form of contracting, and adherence to contracting, matters. The authors note that one of the contractors (achieving low learning gains) did not complete the contracting process, and another (achieving high learning gains) was selected outside the competitive process. As such neither of these contractors completed the due diligence, nor did they receive the $50 per student allocated as part of the programme. This in turn allowed them scope to implement the reform differently to intended – in one case, firing teachers and reducing student numbers with potential knock-on effects for other government schools. They did so while raising significant additional resources from other sources so they were able to more than compensate for not receiving $50 per student.

If contractors are able to circumvent the system in this highly-controlled and visible experiment that had the direct backing of the Minister of Education and was being closely watched by the President, what would happen if the model were to go to scale without such stringent government oversight?

Teachers matter: There is no doubt that, in countries where teacher absenteeism is high, there is a need to reduce this. The Liberia randomized control trial has provided us with robust evidence that teachers in the privately-operated schools were more likely to be in school and in the classroom. The 20 percentage point difference in absenteeism is impressive. However, the model has not yet solved the problem, as 40% of teachers in the privately-contracted schools are still absent.

An issue receiving less attention is that PSL schools had first pick of better-trained, new graduates. This change in composition in the teaching force was responsible for almost half of the increase in learning outcomes. Overall, the evidence implies that teachers do matter to boost learning –  both in terms of being in the classroom, as well as because of who the teachers are.

What happens in the classroom matters: While private contractors might be proven to be more successful than the government at leveraging finances, does this make them better pedagogues? We don’t know the answer to this question one way or another. It is noticeable, however, that questions in education circles on how school leadership and other forms of support to teachers can improve classroom practices is not a key area of attention in the PSL debate.

Successful examples of classroom-based reforms are apparent in DFID’s Girls’ Education Challenge programme. Some of the providers in this programme are a version of ‘PPPs’, with non-state providers working through government schools. Take the example of Camfed, a non-governmental organization with around 25 years’ experience of working in government schools in countries in sub-Saharan Africa to support marginalized girls both to make the transition to secondary school and to learn. Its programme in government secondary schools in Tanzania supported by the Girls’ Education Challenge has not only been successful in keeping girls in school but also increased learning. This increase in learning has been substantial, improving by over one standard deviation, or by 250 percent, compared with standard government schools within around one year – a much greater gain than the 60% improvement by PSL.

Camfed has achieved this by building up a strong relationship with governments in the countries in which it works over many years. The focus of its success is less on the nature of the relationship or ‘contract’ with government but rather with identifying ways to tackle the multidimensional barriers that marginalized girls face in school access and learning. This incorporates targeted financing to meet girls’ school-going costs in tandem with pedagogical measures to improve the welfare and learning of marginalized children. One of Camfed’s innovations is the involvement of Learner Guides (female secondary school graduates from marginalised backgrounds, many of whom had previously been supported by Camfed) who are expected to support girls in improving their self-esteem or aspirations.

There is much to learn from the PSL experiment. In going forward, a comprehensive assessment of the benefits and challenges that a model like PSL can bring will be vital to inform the Ministry of Education in Liberia’s reform process, with wider lessons for children around the world.

Disclosure: The author was a member of the Oversight Group of the PSL evaluation, and an external member of the Girls’ Education Challenge Steering Committee.

14 Responses to What matters for education reform? Lessons from the Partnership Schools for Liberia experiment and beyond