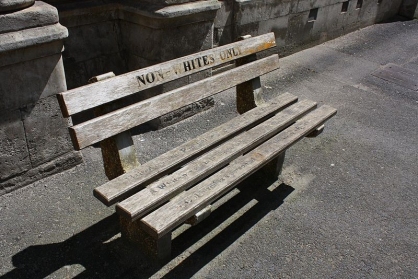 The Reservation of Separate Amenities Act of 1953, an apartheid law, specified the use of many basic amenities such as parks, benches and entrances according to race. (Image: Wikipedia)

I was born in a racist country, with a racist president, and racist laws. My neighbour was a racist. I went to a racist school that did not allow black children to learn in the same space as white children. My racist school withheld information about the racist regime that created the racist curriculum, which only gave one side of the story. In the eyes of the undemocratically elected racist government, white people were superior to black people. Because I was white, I had the right to learn, in the language of my choice. I had the right to choose the subjects of my choice, in the school of my choice. Under the Bantu Education Act black children were taught a different curriculum from white children. The aim was to provide them with skills to work in manual jobs only. As noted in the 2016 GEM Report education can support social inclusion; unequal education results in social exclusion, which sums up apartheid.

When South Africa’s first democratically elected government took its seat in the Union Buildings in 1994, history, as taught in schools, had to be rewritten. The curriculum started to change, offering the other side of the South African story. The way the curriculum developed in South Africa after 1994 became part of the national political process. Education experts were tasked with transforming the pre-1994 history syllabus to become more inclusive. This formed part of the politics of compromise in the interests of a peaceful transfer of power and of national reconciliation. The heroes and notable figures that we began to learn about were governing South Africa, rewriting the laws, trying to create a democratic, nonracial, nonsexist society.

One significant new entry we learned as part of post-apartheid history was the Sharpeville Massacre, as it became known -a turning point in South Africa’s history. It made headlines across the world and sharply intensified international pressure on the apartheid state. The UN International Day for the Elimination of Racial Discrimination is observed annually on 21 March to mark this day in 1960, when police opened fire and killed 69 people at a peaceful demonstration against the apartheid “pass laws”.

On 1 April 1960, the United Nations Security Council passed Resolution 134 after a complaint by 29 member states regarding “the situation arising out of the large-scale killings of unarmed and peaceful demonstrators against racial discrimination and segregation in the Union of South Africa”. The resolution voiced the council’s anger at the policies and actions of the South African government, and called on the South African government to abandon apartheid.

With world authority behind it, UN Resolution 134 became a powerful weapon for the international anti- apartheid movement.

Post-apartheid, South Africa’s first democratically elected government had the responsibility of having to balance the line between teaching nationalism and global citizenship. As a recent GEM Report policy paper on the content in textbooks shows, teaching about ethnic, cultural, religious and linguistic minorities is often more challenging in post-conflict situations.  At a conference to discuss Values, Education and Democracy organized in 2001 by South Africa’s Department of Education, there was a feeling among delegates that extreme caution had to be exercised in using schools as the blunt implement for nationalism. This is even more relevant today as a rising tide of nationalism is felt in several countries around the world.

The 2016 GEM Report Peace Chapter shows that institutional environments play an important role in reintegrating post-conflict communities and can address differences between ethnic and religious groups, and this includes schools. An education that is provided equally, with inclusive teaching and learning materials, is a powerful preventive tool and antidote for conflict. On the flip side, it can promote divisions within and between countries too.

Education was central to the apartheid government’s policy of segregation, and it is central to the democratically elected government’s policy of reunification. The lion’s share of South Africa’s 2017 Budget will be spent on basic education – some R243-billion, or around 15.5% of total spending and 5% will go towards post school education and training.

Such moves are necessary to ensure that households don’t end up footing the bill, as is being protested against now by the protest movement #FeesMustFall, where students have been demonstrating against the increase of tuition fees at South African tertiary institutions.

“Everyone has the right to a basic education, including adult basic education,” reads South Africa’s Bill of Rights. Nelson Mandela saw equality of opportunity through education as the key to emancipation. This principle has yet to be realised in South Africa, or elsewhere. But its growth, and providing a balanced education, constructed on the values of global citizenship, should help mend the rifts of the country’s racist, discriminatory past and create more social solidarity in the future.