Learning how to farm – the impact of Farmer Field Schools

A group of 20 farmers gather around a facilitator who is demonstrating how to prepare nutritious fodder for dairy cows on Zanzibar island, off the coast of Tanzania. They are attending a Farmer Field School – a place where farmers come together to learn how to farm. They spend an entire farming season together, and the field is their classroom.

Before joining this Farmer Field School, dairy farmer Abdi Kassim Iddi and his family lived on one meal a day because his cows produced so little milk. After bringing his new knowledge back to his farm, Abdi’s cows produce four times more milk and his income has tripled. Now his children can go to school and Abdi has new-found self-respect.“I feel like I am now part of the community,” he says, “People see me as a human being.” 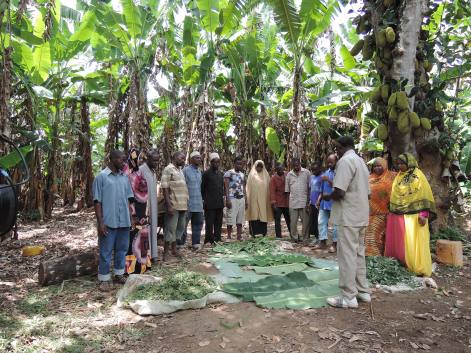 What is a Farmer Field School?

A Farmer Field School (FFS) is a form of adult education based on the concept that farmers learn best from field observation and practical experimentation. A group of around 20 farmers who share a common interest, such as cassava production or poultry farming, come together to follow the seasonal cycle of the specific crop or livestock that is studied. One of the main practical training techniques is a demonstration plot that serves as a ‘classroom’ for testing new methods under similar conditions to the farmers’ own plots. In some cases a control plot is also established to compare the new practices with the traditional ones. Some farmers immediately apply the new methods to their own fields. Others wait to be convinced by the results of the demonstration plot.

Historically, Zanzibar island was an important trade centre for spices and crops, but the local population benefited very little from this. Today the majority of the island’s 1.3 million inhabitants are still subsistence farmers working on small farms of 2-3 hectares. More than half of them live on less than a dollar a day. The Government of Zanzibar —  supported by the UN’s International Fund for Agricultural Development (IFAD) decided that education was the key to improving their lives.

Farmer Field Schools were introduced to Zanzibar as a pilot project in 1996 as a way to empower the rural poor, especially women and youth, to improve their crop and livestock production by learning and practising new technologies and sharing their local know-how. Since then bookkeeping, awareness of HIV and AIDS, nutrition and gender equality have also been included in the curriculum.

By 2016, more than 1,200 Farmer Field School groups had been established in Zanzibar, with more than 28,000 farming families participating. Almost two thirds of them are women.

These schools have been so successful in increasing farmers’ incomes, that the local government now insist that all rural development projects include this approach.

The 2016 GEM Report looks at the way that education and agricultural extension programmes can help increase agricultural productivity. It reports on a recent review of 92 evaluations of farmer field schools which found that they increased their crop yields by 13% and their net income by 19%. Pesticide use by those participating reduced by 17%.

Not just any school will do, of course. The best results come when facilitators of the schools have strong literacy and numeracy skills, are experienced in farming, follow a locally relevant curriculum and use the local language.

“My income before was very small,” said poultry farmer Zeyana Ali Said. “To be honest, I couldn’t even manage to get eggs for my kids to eat. Now I’m proud of myself. There is enough food in my family and I am paying for my children to attend university.” 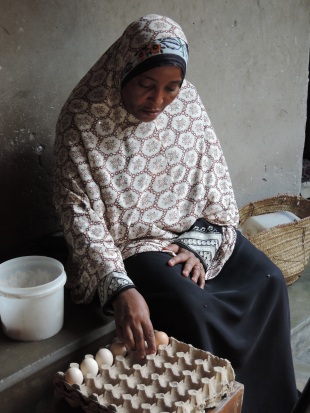 With specific targeting of women students, participation in the Farmer Field Schools has changed lives, families and entire communities. Although most farmers in Zanzibar are women, until recently none of them would have earned their own incomes due to cultural norms. Women would rarely be the ones paying for their children’s education or making decisions in the home. Now many women who have attended Farmer Field Schools are managing their own money, leading meetings and teaching men how to farm. Many of them feel more confident to express themselves in public and are more involved in decision-making in the family.

In this video, Tatu Faki Yusuf says explains that her rice yield has quadrupled since attending the school and she is now an equal decision-maker in her family.  She has also been elected as Secretary of her FFS group.

“Before I felt shy speaking in front of people, but that changed after attending the training,” she said. “Now, even if all of them are men, if I want to say something, I’ll do it without fear.”

Farmer Field Schools in Zanzibar have gathered a momentum far greater than expected. Many farmers who were trained have now spontaneously formed their own schools to further spread the knowledge. More than 450 self-initiated schools have sprung up attended by more than 13,000 farmers. Former FFS students have now become the facilitators.

And so, what began as an idea to teach better farming techniques to farmers has now taken on a life of its own as the knowledge spreads across the island from farmer to farmer, bringing with it economic and social empowerment.