Afghan police better their lives – and others’ – with literacy 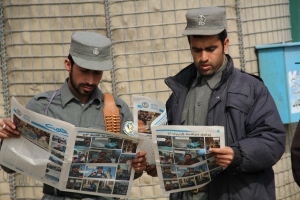 Gul Rahman, a patrolman at Paktya Province prison security unit, Afghanistan, has greatly improved his ability to serve as a policeman as a result of his literacy class. He is married and the sole breadwinner for 12 family members.

“Afghanistan has suffered nearly four decades of devastating war and insurgencies, and because of this disruption I could not achieve my aspiration of becoming literate,” he said.

When the chance came to join the prison’s LEAP class, he took it. LEAP, which is supported financially by the Government of Japan, is part of UNESCO’s wider Enhancement of Literacy in Afghanistan programme.

“There should be no illiterate police,” a deputy from Afghanistan’s General Education Command is quoted as saying in the closing report of the second phase the LEAP programme. “They can’t implement the law if they can’t understand it. Their behaviour toward the public will improve if they are literate; they will understand ethics and human rights.”

The 2016 Global Education Monitoring Report shows that a functioning justice system is critical for sustaining peaceful societies. And it shows that building the capacity of judicial and law enforcement officers is essential. Insufficient training and capacity building and capacity-building can hold back justice and result in delays, flawed or insufficient evidence-gathering, lack of enforcement, and abuse. It shows that many countries have critical shortages of trained police, as well as legal and forensic staff.

The current number of police officers within Afghan National Police (ANP) is approximately 164,000, of which almost 50% are patrolmen/women. According to the 2015 Afghan Police Literacy Study, only 35% (38,000) of them are literate. This means there remain an estimated 43,000 illiterate patrolmen/women, which constitutes a major drawback to quality policing, public protection and law enforcement.

Since 2011, the LEAP programme has been launched in 19 of the 34 Afghan Provinces with funding from the government of Japan and has trained a network of 500 volunteer police literary facilitators and a team with the Minister of Interior Affairs Literacy Unit.

Gul says that being able to read, write and count as a result of the programme has “solved hundreds of problems.”

Gul, for instance learned how to deal effectively with the prisoners’ needs. “Before, illiterate prisoners were asking me to write lists to pass on to their visitors of things they needed, but I was unable to help. Now I can read even formal letters and memos. I can also support my supervisor in the preparation of patrolmens’ work schedules,” he said.

“In my private life, I am able to record my daily expenses in a notebook so I can estimate and control my expenditure on a monthly basis. And when I go to the bazaar to shop, I can read the expiry dates of goods and commodities.”

Now he plans to continue his lessons until he reaches high school graduation level and can become a police officer.

LEAP graduate Rafi-u-llah, a patrol officer in Afghanistan’s Laghman province, told UNESCO in 2014 about the shame he felt due to being unable to carry out simple duties, such as giving directions, because he was unable to read. Graduating from LEAP changed that, “I am now more confident in myself because I can help people,” he said.

Gulghotai, a female literacy learner working at Polecharkhi Prison, says that the program has brought many changes, both personal and professional. “At home we can support our children in their learning and development. As policewomen, we improve our professional behaviour through literacy.”

UNESCO with the Ministry is now looking to implement the next phase of this programme. At a cost of 3 million USD for a 30-month period.  LEAP III will focus on 1) Access: Comprehensive literacy education for all illiterate staff; 2) Quality: Improved quality of literacy teaching and learning, and 3) Management: Ensuring the sustainability, continuity and ownership of the literacy programme.