Why have countries committed to development targets they might never reach?

Posted on 13 September 2016 by Aaron Benavot

It seems a strange decision for any country, let alone all, to sign up to a global commitment they know they will never reach. End Hunger? Eradicate poverty? Are these lofty goals really possible? In the next 15 years? Exactly how will countries get every boy and girl to complete primary and secondary education by 2030 when 263 million are out of school and international aid for education is on the decline?

Why indeed did countries willingly sign up to such ambitious commitments in the new global development agenda? And why does civil society applaud the new agenda, while knowing rationally and in their heart of hearts that it will likely never be achieved?

First, let’s lay down a few facts. Taking education as a case study, how far off track are we?

The latest Global Education Monitoring (GEM) Report, Education for people and planet, shows that, if current trends continue, the world won’t achieve universal primary and secondary education until 2084 – fifty four years after the 2030 deadline written into the Sustainable Development Goals.

Supporters might say that the commitment to this target will surely bring new energy and greater speed in progress, but will that faster speed really be able to catch up on 54 years by the deadline in 2030? Even if the richest countries in the world went at the fastest rate of progress they’d ever managed in the past, the Report shows that one in ten of them wouldn’t achieve universal secondary completion by 2030. And that’s before even talking about the enormous challenges facing sub-Saharan Africa, which is projected to achieve universal secondary in the next century.

Why then did countries adopt this implausible education agenda, you might ask? What on earth is the point of willingly signing up so that civil society can disseminate dire annual reports holding countries accountable for their commitments?

In fact, although global aspirations of universalizing any service may seem far-fetched, they matter for setting a clear vision. The GEM report shows that, among multiple other benefits, if the poorest had the same education levels as the richest, it would reduce the disparity between those in working poverty and those not by 40%.  It is also possible that calling for anything less than a universal agenda would have been giving away carte blanche to ignore the acute needs of the most marginalized.

It is relevant here to look at the way commitments to past global goals have effectively ‘bent’ the curve upwards and helped facilitate new rates of progress. In the five years after the goal of universal primary education was set in 2000, for example, numbers of out-of-school children dropped by 30 million, compared to a drop of fewer than three million in five years running up to today. Yes, it may seem daunting for the five countries in sub-Saharan Africa still likely to be less than half way to achieving universal primary completion in 2030. But it is feasible that the new agenda will contribute to never-before seen change.

Surely no one will really complain if, although we shoot for the stars, we end up landing on the moon. Here we should refer back to the last fifteen years during which only one in three countries achieved their global education goals, yet fighting to do so saw 50 million more children access schools for the first time. Hardly something to regret.

In short, not achieving each education target in its entirety shouldn’t be passed off as failure.  The new GEM Report shows that even modest progress in education over the next fifteen years would have huge consequences for many other areas of development. If education progress stalled, taking with it improvements in community preparedness, deaths due to natural disasters would increase by 20% per decade. 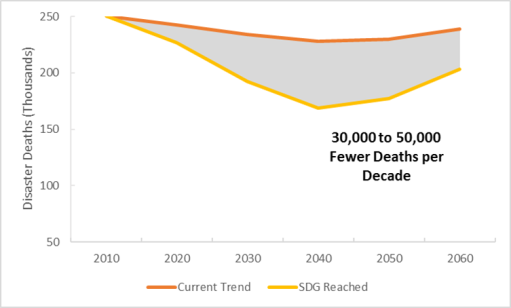 Meanwhile, if we somehow managed to universalize secondary education by 2030, we would lift 60 million more people out of poverty. Just educating women to lower secondary level in sub-Saharan Africa would prevent 3.5 million child deaths between 2050-60.   If that’s not motivating, I’m not sure what is.

But these breakthroughs require a break with business as usual. Collectively we need to ramp up progress on a scale never seen before if we’re to have any chance of achieving them. And that will require innovation, new partnerships and new ways of working.

One obvious new approach to take is to work across sectors, bringing people seeking solutions to health, education and gender issues around a table to identify known solutions to shared concerns. It is no coincidence that the same people not accessing schools, also face hurdles gaining access to health services, clean water and modern energy. That ministries focusing on those issues should be working together goes without saying; the challenge now is for them to develop and implement integrated plans in practice. 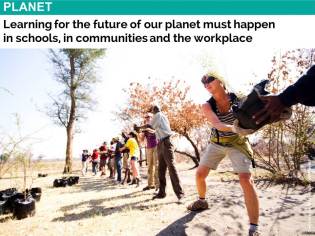 Similarly, we can’t expect that we’re going to save our planet for tomorrow by pinning all our hopes on children only enrolling in school now. We have to think about learning as something that carries on through our life: companies need to take responsibility for training their staff in environmental practices; communities need to work with schools and create platforms for discussion about how environmental problems and stubborn inequalities can be fixed. Only by focusing on youth and adults can we make inroads towards the sustainable futures we need.

Lastly, new ways of finding and securing funds need to be prioritized. Tax evasion, by corporations and the wealthy, significantly reduces funds for education and should be stamped out. Increasing and making better use of domestic resources are critical, and require greater capacity at national and local levels. And the international community of donors must break with tradition and allocate aid according to real need.

The education bar has been set high – too high perhaps. But surely its heady heights are ones we all aspire to, and should continue doggedly to fight to achieve.

3 Responses to Why have countries committed to development targets they might never reach?