The regional stories of the GMR 2015. Part I

The GMR 2015 was released almost two weeks ago. Events are continuing to take place around the world, including in Pakistan, the Philippines, Germany, Netherlands, Namibia and Switzerland just this week. In total, well over 60 countries will be holding launches to discuss and debate the Report’s findings. Below are the summary stories for two regions: the Arab States and sub-Saharan Africa. Each regional overview highlights key achievements, and pinpoints major challenges still remaining before Education for All is achieved. 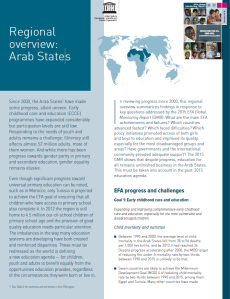 Early childhood care and education programmes have expanded considerably, but participation levels are still low. Algeria is an exception, with a 2% participation rate in 1999 that is projected to exceed 100% in 2015.

Even though there has been significant progress toward universal primary education, such as in Morocco, only Tunisia is projected to achieve the EFA goal of ensuring that all children who have access to primary school also complete it.  The Report shows that the region is still home to 4.5 million out of school children and that just over a sixth of students leave school early in the region. Conflict, and its impact on education, has intensified in the region: the proportion of the region’s out of school children affected by armed conflict has risen from 63% to 87%.

Responding to the needs of youth and adults remains a challenge. Illiteracy still affects almost 52 million adults – just over a fifth of the adult population – and two-thirds of them are women.

And while there has been progress towards gender parity in primary and secondary education, the region remains one of those furthest from the target. In primary school, girls are almost twice as likely never to have enrolled in school. In Yemen, there are still only 83 girls for every 100 boys enrolled in primary school.

The total number of primary school teachers in the region has doubled since 1999, the second largest increase globally. As a result, the average number of pupils per teacher fell from 23 to 19, but increased in Yemen from 22 to 30.

The imbalances in the way many education systems are developing in region have both created and reinforced disparities. These must be redressed as the world is defining a new education agenda — for children, youth and adults to benefit equally from the opportunities education provides, regardless of the circumstances they were born or live in. 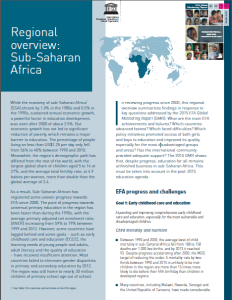 No countries reached all of the Education for All goals in sub-Saharan Africa. Only seven reached the most watched goal of Universal Primary Enrolment.  Sixteen of the twenty lowest ranked countries in progress towards EFA are in the region.

There has been sustained economic growth in the region since  2000 of about 2.5%, but this has not led to a significant reduction of poverty, which remains a major barrier to education. Meanwhile, the region’s demographic path has differed from the rest of the world. Sub-Saharan Africa has the highest share of children aged 5 to 14 in the population (27%), a result of its fertility rate being more than double the global average.

Adult literacy remains a challenge, with literacy rates only rising by 2% since 2000. It is projected that by 2015, one of every four adults denied the right to literacy in the world will reside in sub-Saharan Africa.

Sub-Saharan Africa had about 3.4 million primary school teachers in 2012, an increase of nearly 1.5 million since 1999. Despite this, teacher shortages remain a serious concern, with the region accounting for 63% of the 1.4 additional teachers needed to achieve universal primary education.  Trained teachers remain in short supply: in six sub-Saharan African countries, less than 50 percent are trained. As a result, many children spend five to six years in school without acquiring basic reading and writing skills.

This entry was posted in Uncategorized and tagged Africa, Arab States, education, EFA Report 2015, out of school children, sub-Saharan Africa. Bookmark the permalink.

3 Responses to The regional stories of the GMR 2015. Part I