This week, a Girl Summit is being held in London, aimed at rallying efforts to end female genital mutilation and child marriage within a generation. This blog looks at the vital role that education plays in helping reduce child marriages and the child pregnancies that often occur as a result.

Around 2.9 million girls are married by the age of 15 in sub-Saharan Africa and South and West Asia, equivalent to one in eight girls in each region, according to estimates in the 2013/4 EFA Global Monitoring Report. These shocking statistics mean millions of girls are robbed of their childhood and denied an education.

Our Report also showed, without a doubt, that ensuring that girls stay in school is one of the most effective ways to prevent child marriage. 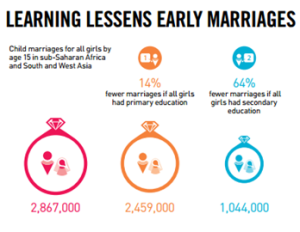 Education empowers women to overcome discrimination. Girls and young women who are educated have greater awareness of their rights, and greater confidence and freedom to make decisions that affect their lives.

If all girls completed primary school in sub-Saharan Africa and South and West Asia, the number of girls getting married by age 15 would fall by 14%; with secondary education, 64% fewer girls would get married. In Ethiopia, for example, while almost one in three young women with no education were married by the age of 15 in 2011, only 9% were married among women with secondary education.

Those gathering at the Girl Summit being held this week in the UK should take note of the links between literacy and child marriage. The evidence is too strong to ignore: While just 8% of literate girls are married by age 15 in South and West Asia, for example, almost one in four who are not literate are married by this age. 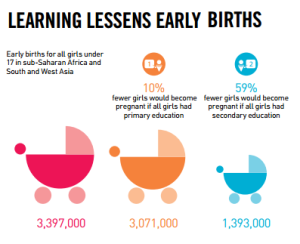 Currently one in seven girls have children before age 17 in sub-Saharan Africa and South and West Asia. In these regions, 10% fewer girls would become pregnant if they all had primary education, and 59% fewer would if they all had secondary education. This would result in around 2 million fewer early births.

The reality confirms the evidence. Click on a photo to read the stories. 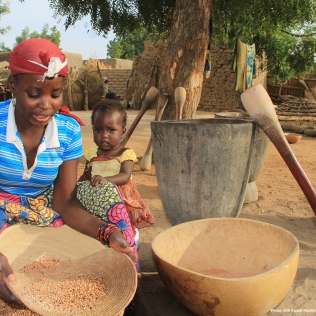 I was not ready for marriage – “I got married when I was 17 and I was not ready for marriage but as you may know in our society in most cases it’s our parents who choose a husband for a girl especially if the girl has never gone to school. I married a polygamous husband. We are currently two wives in the household. I am sure if I’d gone to school I would not have got married so young. When I was child I didn’t regret not going to school as much as I do now. As a mother any time in my life I see or think of a situation linked to my not going to school I feel bad. I wish I had gone to school because in the world today if you don’t know how to read and write it is difficult for you to educate well your children. And now in the village, to have a position of responsibility, you need to have gone to school. Moreover a woman will better understand the explanation given to her by the nurse if she goes for maternal consultations. And this is useful for any mother for her children’s fate. I hope my children’s lives won’t be like mine”.

I refused early marriage – “Being an educated mother I can cope with so many things in life. I can take my children to school without any problem because I can pay their school fees ; the very moment they fall sick, I’m in a position to take them to the hospital. I can also make them a comfortable house. My luck came because of my mother. She wasn’t educated, but she knew that education could really change my life. And as a child I really listened to what my mother was telling me. That is why I refused marriage early, I said ‘I will put my education first’. My mother told me I have to put God first and get educated. And right now sincerely I have to appreciate her because of what she told me.”

Education evaded an early marriage for me – “I’m 18 years old. I think education is very important to a girl, as it makes her very independent, and gives her a chance to stand on her own feet. The society looks down on girls, who are not educated, and takes them for granted and treats them badly. An educated woman is respected. Parents of a girl child are not very supportive in educating her. Whereas they think it is important to educate the boy child, so that he can grow up, get a job and support the family. After my high school, my parents wanted to get me married, but I insisted that I wanted to study further. I do have friends who have not been educated much, who have studied till 2nd and 3rd grade. They were married off at a young age. Now when they see me teaching at this school, they regret not having studied, and feel that they would’ve supported their families and their children by working, had they been educated. I feel bad for them. I think that girls should be educated, establish a career and support themselves and be independent. Only after the age of 25-26, should they think of getting married. Had I been idle, and not pursued education, my parents would have gotten me married. Education has evaded an early marriage for me.”

At 16, I married my cousin – “I’m 22 years old. I got married at the age of 16, and I have two young children. Soon after my 10th grade, my parents got me married to my cousin. I really wish I had studied further, especially when I see my friends who are educated. I would’ve been able to work at a job in some office, earn, and support my family. I think that it’s very important for a girl to be educated. It empowers a girl and gives her an opportunity to stand on her own feet. An educated girl can choose to take up any job and earn a living, and not be forced to work in the fields. Some people who are able to afford the education do so, but those like my parents who face financial difficulties cannot educate their children. I think there should be no child-marriages. A girl should only get married after she has completed her higher education, and is able to stand on her feet and support herself. In my life, there is a never a moment when I do not feel bad about not having continued my education. Especially when I see other women surge ahead, it pinches me. I have an older brother who is well educated. Being a boy, it was imperative that he should be educated. As a girl, it was not necessary for me. My message to all parents would be that parents should let their daughters study till when she wants to, and get her married whenever she is ready to do so. I want to tell them that their girl’s lives should not be like mine.” 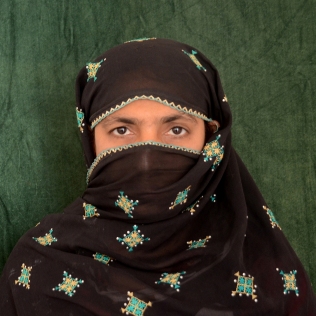 I don’t want this fate for my daughters – “My husband washes utensils and sweeps the floors at doctors’ houses and my children do the groceries. I work as a maid in three houses. I was 15 or 16 when I got married. I was married off at a young age so I don’t want the same fate for my daughters. Our parents gave our hand in marriage without any thought but we’ll not do the same. I have the example of my own life and I will not let this happen in the future to my daughters. Early marriage means we have to shoulder responsibilities from a very young age. Pathans are all for early marriages and if they say it’s to be done, we can’t object to it. We can’t go against the family. It will be difficult. We can try but I know we can’t succeed against customs.”

I regret my daughter’s early marriage – “When I grew up my parents decided not to enrol me at school. I think it’s because my parents themselves didn’t go to school so they didn’t understand how important school is for children. I don’t know exactly how old I was when I got married but I can remember that I didn’t know anything about marriage. I really wish I had gone to school. I think that if a woman is educated it’s her husband who first wins because he is the first person that she will take care of before they have children. Then later also if they don’t have an educated mother they will suffer a lot. The fact that my daughter was not sent to school is because I was not educated so I didn’t know that I could take my child’s hands and bring her to the headmaster to enrol her. When my daughter grew up and she wasn’t doing anything at home we chose a husband for her. I regret deeply marrying her without giving her the chance to go to school, which I realise now is helpful, especially for girls who become mothers and want to educate their children. If she had gone to school she may have got a job to support us and given her children a good education for a good future.”