Over the last decade, 17 million more children are learning in sub-Saharan Africa

New research revealed at the UK launch event of the EFA Global Monitoring Report 2013/4 shows that there has been a 45% increase in the number of children learning in sub-Saharan Africa since 2000.

Sub-Saharan Africa often hits the headlines for the wrong reasons – and this is just as much the case in education as in other areas. Failure of schooling to keep pace with population growth means that the region is now responsible for more than half of the 57 million children out of school. And the EFA Global Monitoring Report (EFA GMR) 2013/4 estimates that only two out of five children in the region reach grade 4 and learn the basics. As a result, almost 80 million of the 250 million not learning live in sub-Saharan Africa.

It is not all bad news, however, as the EFA Global Monitoring Report revealed at the UK launch event hosted by the Institute of Education in London today. The tremendous progress that has been made in getting more children into school in many African countries, in part due to the abolition of school fees, means that there are in fact considerably more children who are learning the basics than a decade ago: new evidence from the EFA Global Monitoring Report estimates that 17 million more children are now learning in sub-Saharan Africa. This represents an impressive 45% increase in the numbers learning. 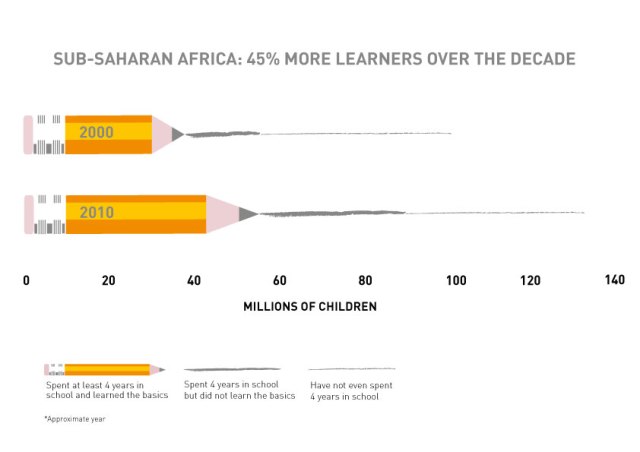 While most of this is due to the increase size of the school-aged population, it is also a result of improvement in the number of these children spending at least four years in school. This has led to the proportion of those achieving the minimum learning standard in reading increasing from 37% to 41%. Contrary to expectations, this suggests that primary school expansion in countries in the region did not lead to a significant deterioration in quality. Rather, the poor quality of education that is leaving large numbers still not learning the basics is as much a legacy of past problems in the education system that still need to be addressed.

This provides an important message for those designing education goals after 2015 – quantity and quality of education should not be seen as a trade-off, but rather reform is needed to tackle both simultaneously. In particular, it is crucial that resources reach the disadvantaged who are most at risk of not being in school or, if they make it to school, are receiving a poor quality education.

Important lessons can be learnt from countries with strong policies and donor presence to help fill resource gaps, resulting in improvements in both access to schooling and learning. In Tanzania, for example, the proportion who were both in school and learning almost doubled between 2000 and 2007. Abolishing school fees led to a massive increase in numbers of children entering school for the first time. This translated into around 1.5 million additional children learning the basics in that country alone. Children from both poor and rich households benefited from this progress. With only around 1 in 5 of the poorest completing primary education and learning, this is of course not to say that much more still needs to be done to improve the quality of education for all children. However, blaming the problems on expansion of primary school systems is misguided.

Part of the reason for Tanzania’s progress is that it has shown strong commitment to investing in education, spending more than 6% of its gross national product on education. But, like many other poor countries, Tanzania cannot afford to reach all children with a good quality education on its own. Calculations in the 2012 EFA Global Monitoring Report identify that aid amounts to as much as one-fifth of education budgets in low income countries, on average.

Amongst aid donors to education, the UK, through its Department for International Development (DFID), has played a lead role. DFID’s commitment to education is further highlighted by the presence of Alan Duncan, the Minister of State for International Development, at the UK launch of the GMR, speaking about DFID’s important work on access and learning for the marginalized, and girls in particular, in developing countries. Its continued commitment to devote 0.7% of GNI to aid has translated into more resources for education in recent years, with a focus on basic education in the poorest countries in particular. 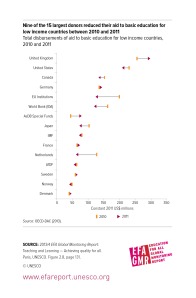 Unfortunately, many other donors have not upheld their commitment to ensuring no country is left behind due to lack of resources: nine of the fifteen largest donors to basic education in low income countries reduced their aid between 2010-2011. As a result, the UK is now the largest donor to the sub-sector.

It is troubling that the 9% decline in aid spending to basic education in low income countries between 2010 and 2011 has hit 19 of the poorest countries – Tanzania amongst them. Without donor support to education as promised in 2000 at the World Education Forum in Dakar, these countries will struggle to provide the quality of education that their children deserve.

There is no room for complacency. On current trends, the EFA Global Monitoring Report warns that without attracting and adequately training enough teachers it will take until 2072 for all the poorest young women in developing countries to be literate; and possibly until the next century for all girls from the poorest families in sub-Saharan Africa to finish lower secondary school.

With an annual $26 billion financing gap, insufficient resources remain a major reason for the continued failure to achieve education goals that were set to be met by 2015. This is why the EFA Global Monitoring Report is calling for financing targets after 2015 – both for governments and donors. Only then will we be able to keep the commitments to ensuring all children are learning the basics in the future.

Note: With limited historical data, this estimate is based on 20 countries for which data are available, with assumptions used for other countries in the region. It does, however, indicate that learning has improved over time. To be able to monitor learning more systematically in the future, regional and international learning assessments need to cover more countries on a regular basis, working together to present an internationally agreed measure of learning.

This entry was posted in Uncategorized. Bookmark the permalink.

8 Responses to Over the last decade, 17 million more children are learning in sub-Saharan Africa