PHOTO BLOG: The state of girls’ education around the world

To tie-in with the release of the Gender Summary of the Education for All Global Monitoring Report 2013/4 published by UNESCO to mark International Women’s Day, this photo blog tells the story of the state of education for girls and young women around the world.

The Gender Summary of the 2013/4 Education for All Global Monitoring Report highlights the serious gender imbalance in global education that has left over 100 million young women unable to read a single sentence. The summary, launched for International Women’s Day in partnership with the UN Girls’ Education Initiative, calls for equity to be at the heart of new global development goals after 2015 so that every child has an equal chance of learning through quality education.

Read on to find out more about the state of girls’ education around the world. 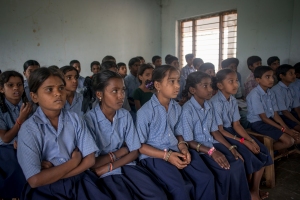 Sixth and seventh grade pupils in class at a government school in Andhra Pradesh in India. Photo: Paloma Basi

End the learning crisis for girls 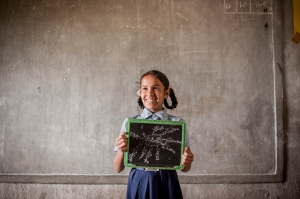 Faimonissa, 10, shows off her maths slate during an Activity Based Learning class, India. Photo: Paloma Basi

“The impact this way of teaching has on the pupils’ learning is huge,” Faimonissa (pictured) says: “I like the new methodology. Before, the teacher would make us sit in a line, away from the blackboard and teach us. Now, we all sit around in a circle, along with the teacher and learn. We all understand much more easily through this new method. If we don’t understand something, we ask our teacher and they explain it to us.”

In Pakistan, on recent trends, rich boys and girls are expected to complete primary school by 2020, but poor boys will only reach this fundamental target in the late 2050s and poor girls just before the end of the century. 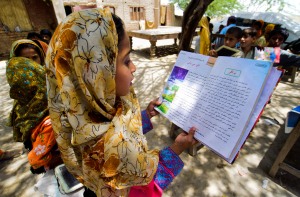 At this primary school in Shikarpur in Sindh, Pakistan, girls have no school to go to because their school building collapsed years ago. They now go to classes under a tree. Learning in such conditions is very difficult.

The Gender Summary of the EFA Global Monitoring Report 2013/4 cites a chronic shortage of female teachers affecting the number of girls who enroll and complete their education. In Pakistan, only half of girls make it through to the last grade. 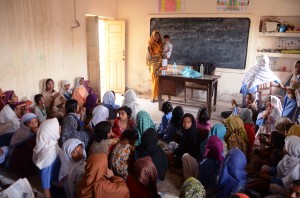 Sanober is the only teacher in this school for over 100 girls, Pakistan. Photo: UNESCO/Amima Sayeed

Sanober (pictured) is the only teacher in this Pakistani school and she only has basic training. She is expected to look after over 100 pupils over five different grades. Sanober explains: “There are 110 girls studying in this school – we kept on adding one class per year. It started off as a one teacher, one grade school only. Now we have classes up to grade five. Admissions are continuing but I can’t manage any more students over 110 or 120. There are more girls in the village but I can’t enroll them in the school.”

Poor quality education or lack of access to education has left a legacy of illiteracy among young people that is more widespread than previously believed. In total, the Gender Summary of the 2013/4 EFA Global Monitoring Report shows that there are over 100 million young women who are unable to read a sentence.  On current trends, the Gender Summary projects that it will take until 2072 for all the poorest young women in developing countries to be literate. 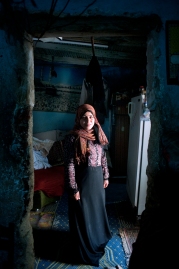 Soad does not know how to read or write because she never got the chance to go to school, Egypt. Photo: Karel Prinsloo

Education transforms the lives of girls

Soad (pictured) is a 20-year-old living in Cairo, Egypt. She works as a house cleaner because she never got the chance to go to school and does not know how to read or write.

An education for girls like Sanjitha (pictured below) can help them break out of the cycle of illiteracy and poverty. Sanjitha says, “I’m a first generation learner in my family and my parents are uneducated. My parents are farmers and struggle to put a meal together but they would do anything to send me to school. They want me to study so that I don’t have to cut grass from the age of 10 like them. Education for me is an opportunity. I don’t know if I’ll get a good job or what kind of a work I’ll get but I want the door of opportunities to open up. Most importantly these opportunities will keep me from getting married early and help me gain my parents’ respect for all their hard work [to keep me in school].” 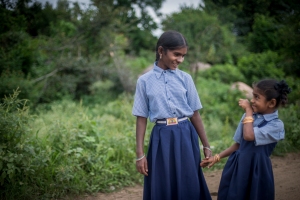 Schoolgirl Sanjitha, 14, with her cousin Ramila, 7, knows the benefits of a good quality education in India. Photo: Paloma Basi

In middle income countries in Latin America, such as Argentina, Brazil, El Salvador and Mexico, the proportion of women in paid employment increases sharply as women’s education level rises, according to analysis in the Gender Summary of the 2013/4 EFA Global Monitoring Report. For example, in Brazil, while 50% of women with primary education are employed, the proportion rises to 60% of those with secondary education. Karolayne (right), 15, says she’d have made better choices if she had the chance to go to school, Brazil. Photo: UNESCO/Eduardo Martino

Karolayne (pictured) says she wish she had gone to school to help improve situation: “Before I got pregnant, I never thought about my future, but now I want to study, get a job, a house and provide the best for my son.” In Brazil, only 63% of urban paid workers with primary education are protected by an employment contract, compared to 80% of those with secondary education.

In Kenya and Uganda, being a girl and living in poverty can create a potent challenge. Among the poorest households, only 23% of Kenyan girls both complete primary education and achieve the basics. Educated women are more likely to use public health care services, to have fewer children and not to give birth as teenagers – all factors that reduce maternal mortality. If all women in sub-Saharan Africa completed primary education, the maternal mortality ratio would fall by 70%, from 500 to 150 deaths per 100,000 births.

Education is important to provide children, particularly disadvantaged girls, with the skills they need in order to find well paid and secure work later in life. 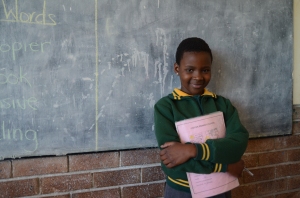 Nompumele knows that an education will help her find work and break out of the cycle of poverty, South Africa. Photo: UNESCO/Eva-Lotta Jansson

Nompumele (pictured), 12, grade 6 learner at a primary school in the Alexandra township, Johannesburg, South Africa says: “I like school because I earn an education from school. Today, jobs are hard if you don’t have an education, so you better be educated so that you can have a better life. I want to be a doctor, that’s my first thing. I want to help those people that are really sick.”

Girls and women who are educated have greater awareness of their rights, and greater confidence and freedom to make decisions that affect their lives, improve their own and their children’s health and chances of survival and boost their prospects. Niger is not projected to reach universal primary completion for rural boys until 2090, for rural girls, it’s even worse and won’t be achieved until 2120. This leaves a legacy of illiteracy amongst young people, particularly affecting girls. The country has one the worst female literacy rates of any country in the world. Less than a quarter (23%) of its young women can read a sentence. 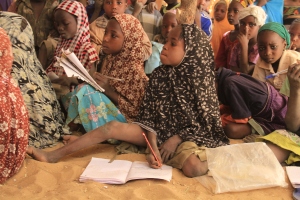 Batoula, 13, understands the need for her to go to school in Niger. Photo: UNESCO/Djibo Tagaza

Batoula, (pictured) 13, understands the need for her to go to school in Niger: “School is important for girls because it helps you to know how to read and write. If the parents aren’t educated they don’t want to educate their girls, which is a problem for the family. I think girls should learn all the subjects at school because if she is educated she can become a minister and have the same opportunities as a boy”.

New education goals after 2015 must include an explicit commitment to equity so that every child has an equal chance of an education. Insufficient progress towards education goals reveals a failure to reach the marginalized, particularly girls. In low and lower middle income countries, the poorest rural young women have only spent three years on average in school – with little change since 2000, and at least six years behind the richest urban young men. New goals need clear, measurable targets with indicators that will track the progress of the most disadvantaged.

83 Responses to PHOTO BLOG: The state of girls’ education around the world